After a celebratory Christmas made even better by a visit from a dear friend, I felt like life in Coolangatta was becoming less and less inspirational. I had completed a year in Australia and still had not properly gotten into the Architecture environment. Surfing would always be a passion but right now it wasn’t enough to fill my life to the point of being intellectual fulfilled. And even though working up to four nights a week in a restaurant would cover my expenses throughout the week, the eternal holiday feeling was getting tedious. I was just over it. I was over getting to know new people every day, I wanted to know the same people better. I was over the communal kitchen, the shared bedroom and being kept up by other people’s daily or nightly routines. I longed for an A4-lifestyle again, with an external sense of purpose provided by a professional job and the physical comfort of a house and a private room.

A great Christmas on the beach!

So when I, sort of by chance, got in touch with an old friend from home who was living in Melbourne, the city started to sound a little bit more appealing. As things were trailing off in Cooli and other things pointing towards Melbourne, a simple, innocent incident at the hostel made it all so clear; I am out of here! The Coolangatta Sands era is over, I am moving to Melbourne.

I spent two weeks wrapping things up with work and the living arrangement in the hostel. Owning a car there was really only one option of how to travel. Roadtrip! “Penny” and I, on the road, with nothing but good music and a load of snacks. First leg of the trip went south to Newcastle, a seven-eight hour drive. Spending the night in town, I continued south the morning after to catch up with a previous Coolangatta roommate in Wollongong. Doing some sightseeing on the way our goal was Jervis Bay to do a couple of nights camping in our cars. After a day of driving through dry forests, the colder, southern climate provided a stunning scenery of green valleys and a rugged coastline. And Jervis Bay did not disappoint with Caribbean lookalike beaches, but the water temperature however, was more of the Scandinavian kind.

Central Coast; Newcastle, Wollongong and the blowhole of Kiama.

As the temperatures dropped and the skies were no longer blue we decided to head for Canberra a night early. Heading inland I spent two days in the Australian Capital. The fresh, dry mountain air of course being a complete opposite from the humid tropical environment I’ve been used to. I chose the detour of driving across the Snowy Mountains to pay a visit to my previous farm work employers. An hour into the drive the nice asphalt road suddenly turned into stone and gravel going on for tens of kilometres at the time. Keeping my fingers crossed for making it across without a flat tyre, I made it doing a max of 30 Km/h. And with that causing a two hour delay, getting to Melbourne that day was out of the question. So instead I spent a couple of hours visiting the farm where I trained a wild horse a year ago (which you can check out here!). Although the stay at the time was difficult, it was a completely different mood when visiting as a friend, well worth the detour.

I spent the night camping at a rest stop half way down to Melbourne along the highway. Although sleeping in your car can be quite cosy, this night it was horrible! Cracking a window to allow for fresh air, I also allowed for what seemed to be a hundred mosquitos! I tried covering as much of my body as possible but the exposed part was of course my face which then had no less than 12 bites in the morning. Or should I say pimples because that was what they looked like (welcome back puberty, oh, how I missed you..). Slapping myself awake every time I heard that terrorizing buss in my ear, it wasn’t quite the relaxing night I was set up for. But at least waking up with the sunrise was beautiful.

Finally arriving in Melbourne, I was lucky enough to go straight to my own room at my friend’s newly rented house. Turns out, her and her boyfriend are both painters and very good at cleaning out houses, so I had the privilege of stepping into a clean, freshly painted home. Scavenging free furniture from gumtree.com, our first week was spent upcycling old wooden chairs and tables and creating the atmosphere of my new, Melbourne home. 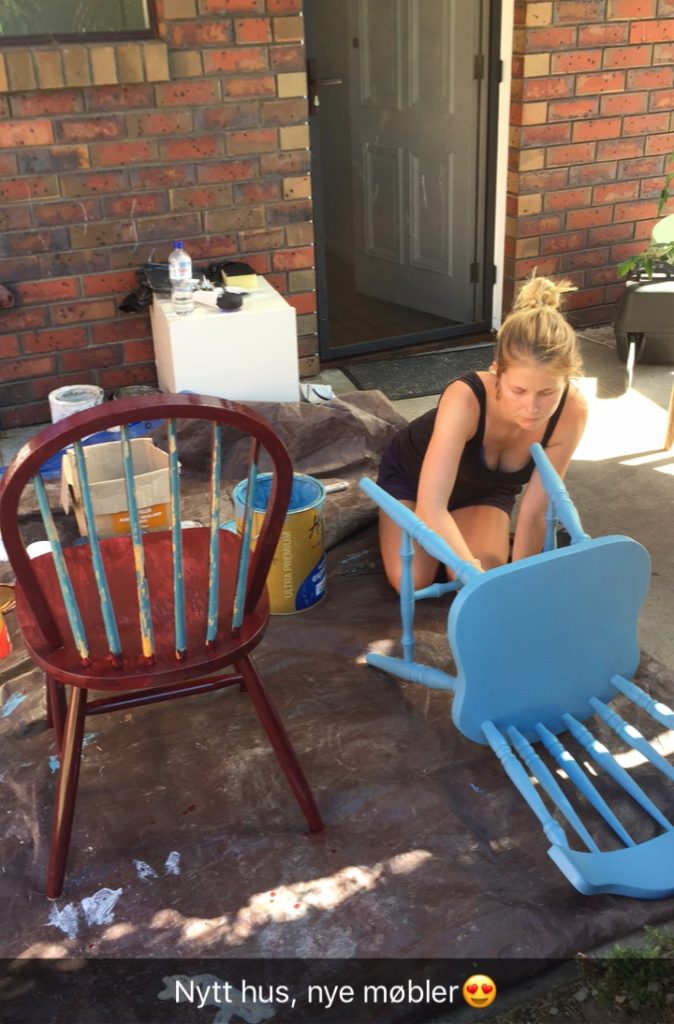