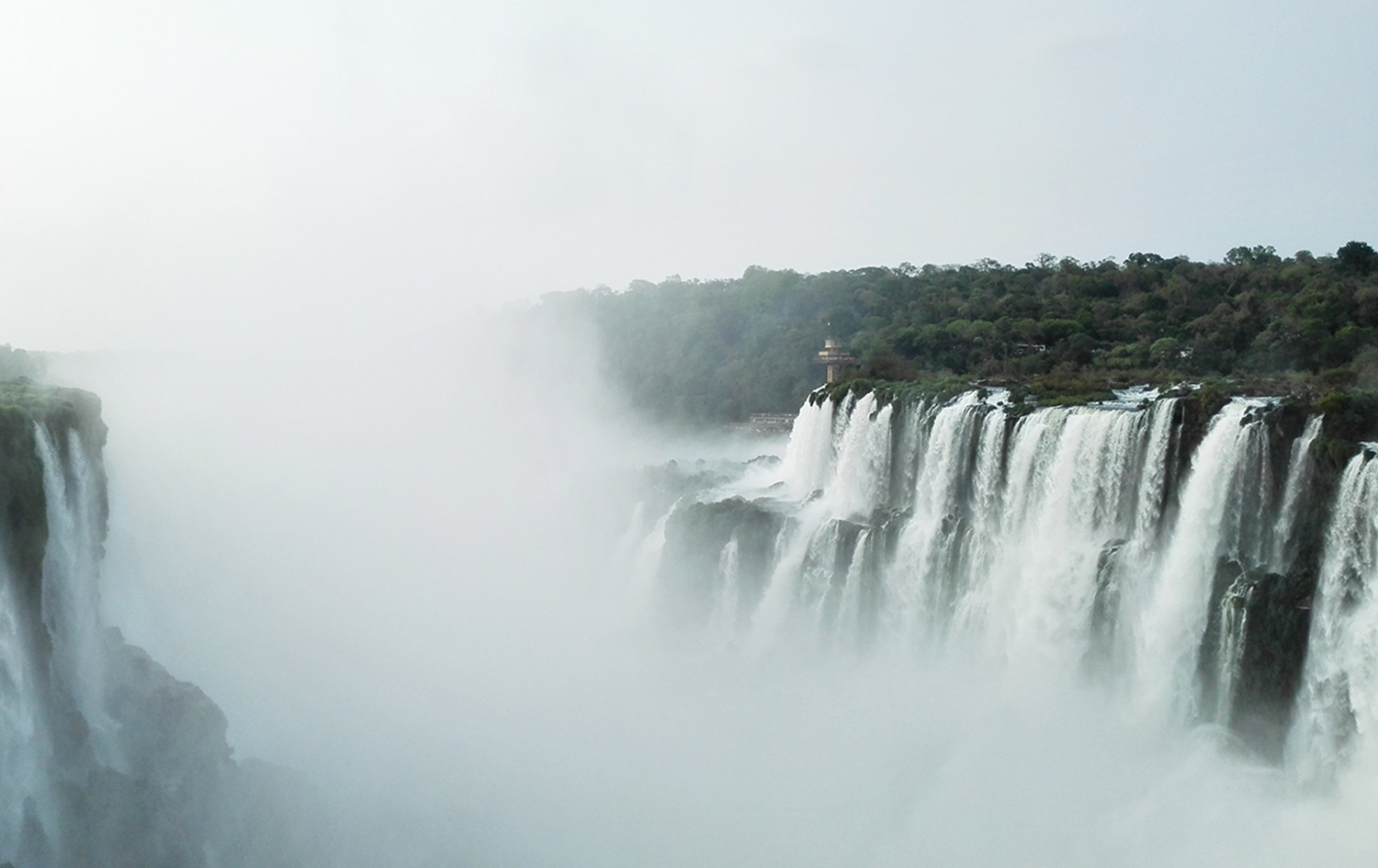 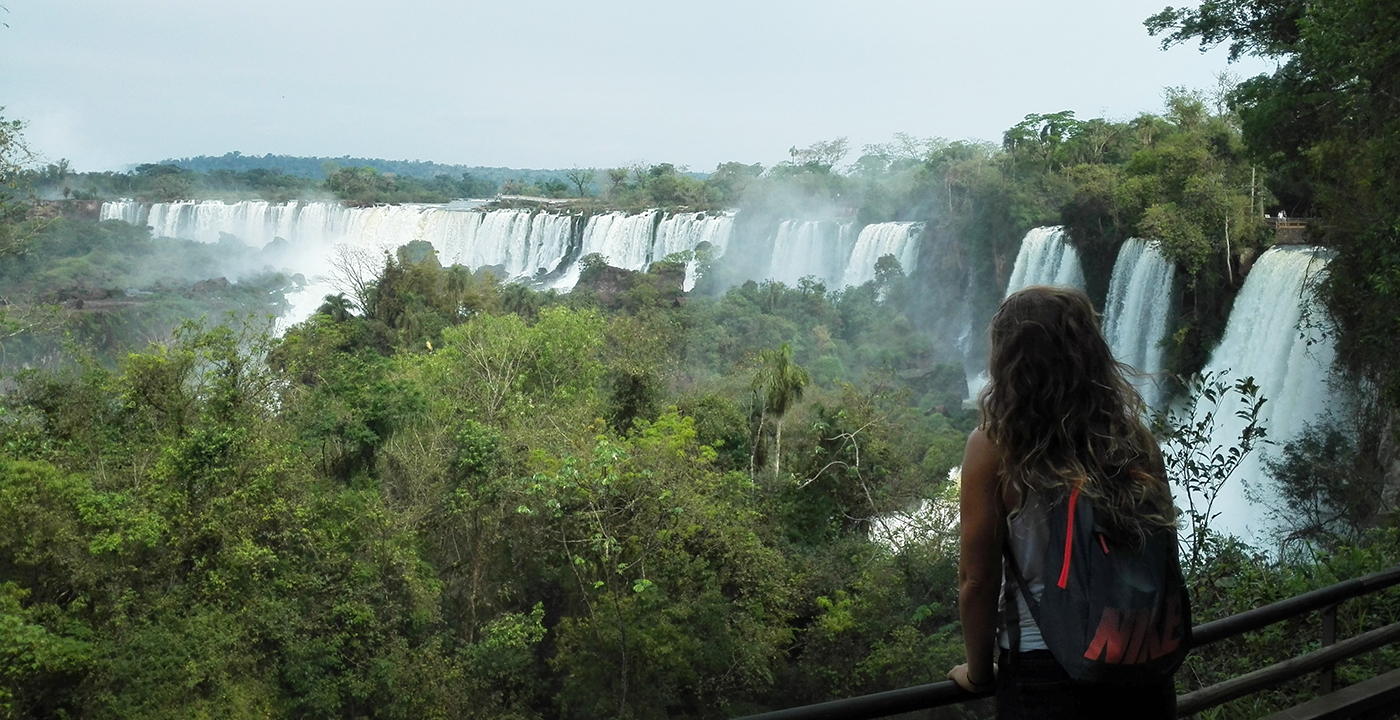 It took me a few weeks to settle on whether to go to see the Iguassu Falls or not. I knew it would break my budget, but then again it has recently been chosen as one of the new 7 wonders of the world in the Nature category. And everyone kept saying I had to. Lately I’ve been less tempted by sightseeing and I mean, how amazing can some waterfalls be? So I left it till the last week to buy my tickets. I was staying in Ubatuba at the time and almost didn’t go through with it, as surfing in Ubatuba was pretty good. But being a bit of a bucketlist fan, I decided it was now or never. And I’m glad I did.
I planned my trip all the way through as I didn’t want to spend more time than necessary at was rumoured to be a massive tourist trap. I got a bus ticket from Sao Paulo and booked a hostel in Puerto Iguassu, Argentina, before deciding to get a flight down to Buenos Aires. The Argentinian buses were quite expensive online and I found a cheap Saturday night flight to the same price. Turns out the buses are actually half the price when you get tickets at the terminal and pay cash.
The bus from Sao Paulo took 15 hours and I was quite happy to have paid for a Leito (first class) seat. Nothing about it was first class though, but the seat was definitely more comfy than regular one as I managed to sleep at least 6 hours straight. We arrived in Foz do Iguazu at 10 am and I headed straight for the park. I was not wasting any time.
It’s funny how traveling surprises you. I was expecting to do Iguassu alone, I was not spending any time at a hostel, and had not even tried talking to anyone on the bus getting there. But suddenly during a 30min local bus ride, we were a group of four travellers who found each other and were now doing Foz and Puerto Iguazu together. A new little family.
​​
Traveling alone you find people when you least expect it
My plan for how to travel in Foz do Iguazu was completely depending on research from Tripadvisor saying that there were big lockers at the park entrance. I wanted to spend the night in Argentina to get an early start in the bigger park and therefore didn’t have a hostel to leave my stuff at in Brazil. Luckily, the lockers were a fact! And cheap as we are, we spent at least half an hour trying to jam four backpacks into one locker.  That was pushing it though.
The Brazilian side of the park took about two-three hours to walk through. The pathway is dramaturgically choreographed so you’ll continue to be astounded by the sights that just keeps getting better. Along the way you’ll be accompanied by exotic butterflies and the mascots of Iguazu, the Coatimundis. These little rascals will try to get their claws on anything resembling food, and they’ll get violent about it. It was the first time I ever appreciated spending a fortune on that Rabies vaccine.
​​
Lots to see in Iguazu, also a bit of wildlife. The range of exotic butterflies was especially fascinating.
​​
Iguazu is such a big tourist atraction, it’s probably smart to go during low season as you still have to queue for a photo at the most popular spots.
​​
The Devil’s Throat from seen from the Brazilian side.
After seeing the Brazilian side of things, we waisted no time crossing the border to Puerto Iguazu, Argentina. First thing on the list: Money exchange! I was fortunate enough to be advised about the blue dollar before heading to Argentina and spent some time in Rio getting cash and buying dollars. Today there is a difference of at least 60 % more pesos for your money when bought at the black market. Which means that everything is only costing you two thirds of the given price.
Things were a bit more pricey on the Argentinian side. Everything from the bus to the park, the park entrance and food in general. But it was all totally worth it. This side of the falls beat the other side by a landslide! I would still recommend seeing both sides, but if you can’t start with the Brazilian one, saving the best for last, you might as well not even bother. Doing it the other way around would be like seeing the end of a movie and then the beginning. It sort of ruins it.
The Argentinian waterfall park is divided into lots of pathways and the map of how to get to each one suck so you might as well follow the crowd and do them all. We spent about 5 hours doing the Lower Circle, Upper Circle and Devils Throat. There was the option of spending a fortune on getting wet by real fall water on a rubber boat, but it didn’t really appeal to me.
Walking around you get both a panoramic view and see the falls close up, from underneath and above. It was absolutely stunning! The most dramatic sight is the Devil’s Throat. Here you get to stand above the biggest section of the waterfall. The horseshoe shaped edge collects all the falling water into one white, smoky abyss, and looking down you feel like you’re being sucked in. Definitely worth the trip!
​​
The Argentinian side
​​
Arriving in Argentina also brought other pleasantries. We almost immediately went shopping for meat and red wine. And it was not overrated. Even the average, non-pricey meat tasted amazing and the red wine could compete with any French I’ve ever tasted. It also meant all sugared yogurts and caramel crème for breakfast. That healthy diet that was getting a run for it’s money in Brazil is not getting it any easier here in Argentina.